In the last several decades, traditional retailers of food have weathered any number of crisis moments.

The Great Shrinking Market Share. About every five years or so, a competitive force arises that causes the entire industry to rush toward this potential threat to try and beat it back—with little success. The interlopers have ranged from generics to club sizes, from health food stores, to dollar stores and drug stores selling ice cream. In fact, since the whole suburban supermarket model emerged post World War II, when market share was pretty much “all of it,” the percentage of food sales by channel for grocers has dropped from practically 100%, to 47% in 2017. Almost a 60% decline, according to data from The Food Marketing Institute. No wonder the only way to really grow has been to buy every competitor in sight and “synergize” your way to 1% net profits.

Who Are Those Guys? Chunks of share have been bitten out by types of stores that didn’t even exist before: Super Centers (24%), Warehouse (5%), Limited Assortment (5%) Organic/specialty (2%), etc. Recently, of course, everyone is sprinting to counteract the power of online-only players like Amazon. Almost every day, here comes another story about this store adding delivery in less time than ever, that store launching an app, etc. Personally, I’d like to see more operators work their email list a bit harder, but that’s another post.

Here’s An Idea. Meanwhile, there was a small article recently in a supermarket trade publication, announcing that Kroger, the largest traditional supermarket on the planet, was going to be offering “digital display” ads to CPG companies. They will be using contextualized consumer data curated by their in-house 84.51 analytics division, served up to visitors in their online environment.

Wow—I just think this is brilliant and whomever came up with the idea deserves a significant bonus in the form of Amazon Gift Cards. And it’s smart not just because of the wiz-bang AI, machine learning, big data part, but the fact that someone figured out how to build an online end cap display.

Taking a cue from Google, Facebook and of course Amazon, Kroger merchants will be able to sit across from a vendor and offer them the chance to wind up at the top of search results for their category while customers are shopping online. And it will be more complex than simply owning the search term “frozen pizza” or whatever in the closed Kroger universe. It’s the chance to feed ads to customers most likely to buy the product based on past purchase behavior, just like Amazon does. They will be able to target the customers most likely to buy a frozen pizza with unusual, organic ingredients in a lower income neighborhood. Stuff like that.

We Have Seen The Future And It’s Self Service. In fact, you can imagine that eventually this whole routine could become self-service for the vendors, just like it is on Amazon, Google, Facebook and the other platforms. You log on, pick your target audience, define the geography and write your own ad. It’s not outside the realm of possibility. Follow this one step further and you can believe that in just a few years, the category manager position becomes superfluous, because the store’s algorithm is determining what should be sold at what price, to whom exactly, including new items and discontinued SKU’s. So the only human job title would be Merchandising Admin, I guess?

Hello Brave New World. Clearly, this has this has the potential to become a huge revenue stream for Kroger. Selling actual end caps and ads in the in-store shopper’s guide is SO 2017 now. Or 1984.

When grocers realized decades ago that CPG’s were willing to pay extra to secure in-store positioning and signing, they came to understand that they were landlords as much as supermarkets, controlling some very valuable real estate.

Now, faced with the huge, dark storm on the horizon that is Amazon and every other on-line shopping option, Kroger is realizing that a new currency of their realm is their digital real estate and the customers who visit there. If they have been effective at establishing long-term customer relationships, there’s a good chance that goodwill can be extended online, creating a loyal, somewhat captive audience.

Amazon Takes Sellers To The Brink. How important could this new, non-traditional revenue be for brick and mortar/online retailers? All I can tell you is this real life experience: My wife August has a web site that sells a number of products direct to customers and via Amazon. (www.techwellness.com) She even has an Amazon store front (www.amazon.com/SaferTech).  Her experience is that basically if you want to sell something on Amazon, fail to advertise with Amazon, you need to be fulfilled by Amazon and ship from their distribution centers, which comes with all sorts of related fees. If you’re stubborn and decide you don’t need to advertise, you’ll discover that you really won’t have sales either. Generally, if you advertise, you sell. If you don’t, you don’t. 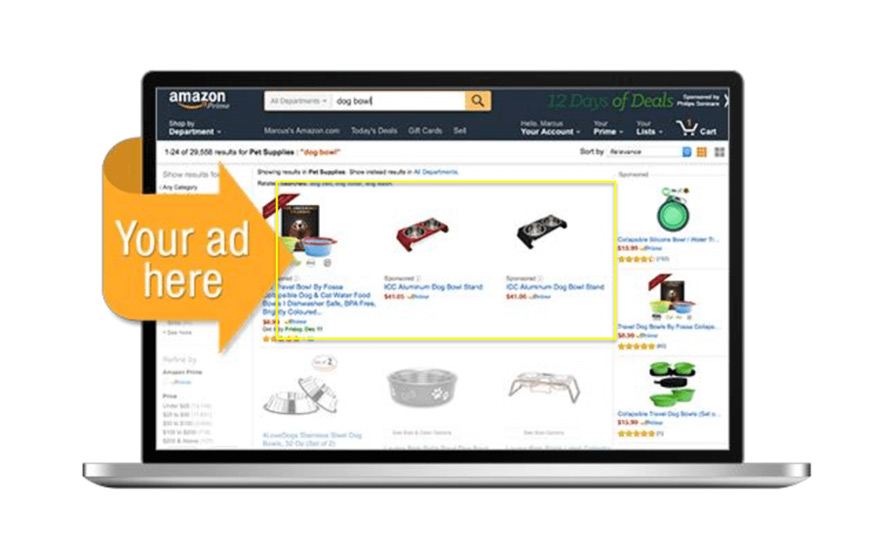 When she advertises, August has seen that ads and fulfillment can take between 24-50% of each sale, depending on the level of sales and the effectiveness of the ads. Sounds pretty much like regular a retailer, doesn’t it? (It’s actually pretty fascinating to see how this works. I’m planning a behind-the-scenes video with her to show you.)

It will be interesting to see how Kroger prices this offering, since most every product they sell online will already be in brick and mortar as well, with wholesale pricing already negotiated—and promotion already laid in. So this will be yet another “that’ll have to go in next year’s budget” item in many cases.

But honestly, before you jump to conclusions and say it’s going to be outrageously expensive, CPG people, you need to think of it like this: It’s like paying for an end cap display, except when a customer approaches, everything else in the category—in the entire store actually—gets blurred out and gray. All the customer can see is your shiny package, with a big proud price on it. Click.

Likewise, if you’re a food retailer with any sort of online capability, don’t be afraid to investigate this NOW. You may not even need the super sophisticated data that Kroger is touting. Context like that will let you to push messages to people most likely to buy, based on the kind of shopper they are. However, if you’re basing serving the ads based on search, it’s simply the chance to plop yourself at the top of the list of the search results. It may not be market share, but it will be cash flow.

You just need to know a new profit center when you see one.

Find more of our thoughts on the grocery business here.