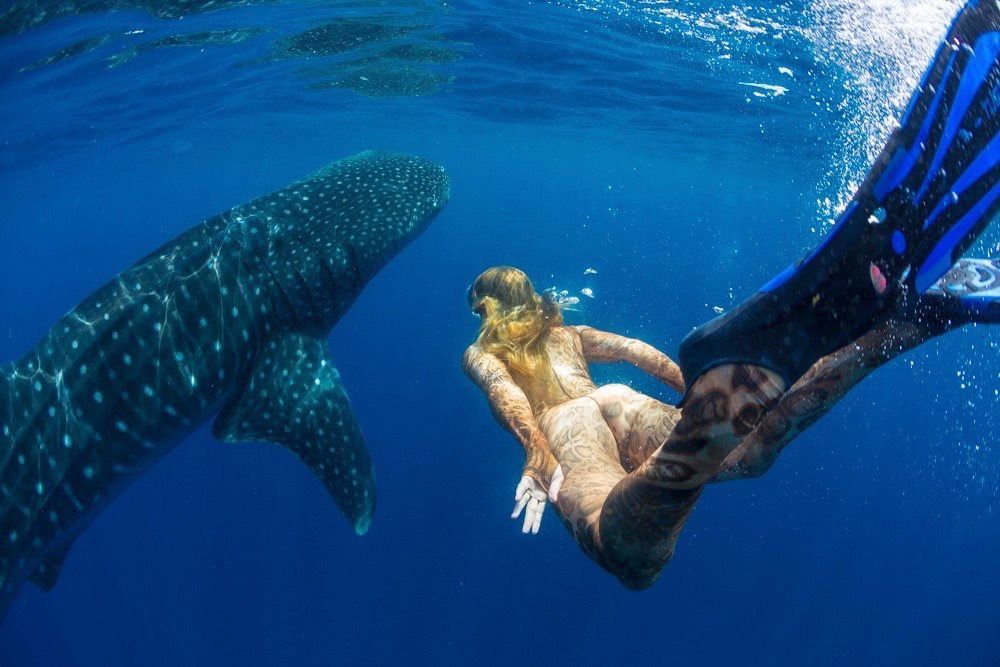 Hal Experiences His Very Own #SharkWeek

Eli’s company, Shark Diver Magazine (SDM Adventures on Facebook) sponsors a number of up close and personal expeditions every year, ranging from tigers to hammerheads to dolphins and whale sharks and even crocodiles.

You may have seen Eli this week, as Discovery re-ran his program from a few years ago, “Zombie Sharks.”  Here, Eli takes uber-dangerous tiger sharks, regarded as the shark most likely to eat you for no reason, closes their mouths and flips them upside down, putting them into a sort of catatonic state for a moment.  Great television.  In fact, that moment was rated the #3 all time most incredible moment in the history of Shark Week.  You may have also seen him swimming in the wild surrounded by curious killer whales.  Etc. etc.

On our trip, we had four amazing days of searching for whale sharks miles out into the open ocean, and then jumping in the water to observe, photograph and swim along with them.  They are about 30 feet long and are near the surface this time of year, feeding on fish eggs.  So no vast array of huge sharp teeth, but we were snorkeling in five foot swells with fish the size of school buses.  Not exactly a visit to the aquarium!

Now here’s the passionate community:  Of about 25 people on our trip, we were almost the only ones who had NOT been on a trip with Eli before!  Some had been on seven trips, some over ten.  That’s some excellent marketing–and of course delivering a product that keeps them coming back.

So how do you market swimming with sharks?  (Very, very carefully!)

Eli and his family live in Texas hours from the ocean.  Years back, as his shark hobby turned into an avocation of sharing it with others, he started publishing Shark Diver Magazine.  Using pictures he and friends had taken on trips, writing all the stories himself, laying it all out, paying for printing and shipping and distribution before ever selling a single copy.  It was risky and consuming and took most of his time when he wasn’t in the water.

Shark Diver began to build a loyal following.  But he started to notice that most of his real interaction with current and future customers was coming from Facebook, Youtube and later Instagram.  Which makes sense, because those are some amazing images and videos.  Then came Zombie Sharks.  Which turbo charged his awareness and made him much more of a household name among certain households.  For one week a year, Eli is a bona fide TV star.

At a certain point, Eli realized that all the work and risk and time associated with getting a magazine out, wasn’t really as important to his success as getting some action on social media.  So a couple of years ago, he quietly stopped publishing the physical magazine, relying on social media and Shark Week to drive his brand.  And his growth took off.

So essentially, Eli is still publishing every day, but his channels—and his speed to market—have simply changed.  He now spends more time putting effort into places where he can have an impact and reach people quickly.  And he continues to build a community.  His message of conservation and that we should understand these predators rather than fear them is able to be much more timely and responsive.

In our business, we always urge our clients to focus on building advocate customers, the people who will spread the word and come back over and over again.  How’s this for evangelism?  Over 30 people have tattooed Eli’s Shark Diver logo on their bodies.  It’s a handsome logo, but that’s some kind of love!

It seems to me that Eli is doing a phenomenal job of leveraging the assets he has developed.  To borrow from that famous business book from years back, “he found new cheese.”  He is finding ways every day to target people who are more likely to connect with his brand of adventure.

It’s the difference between having his traditional magazine sitting on a shelf at Barns & Noble, hoping someone who likes sharks will happen by—or using satisfied customers like us, sharing images with people who either trust us or are already into the adventure.  That, in my book, is brilliant marketing.

Eli is currently pitching a new series of shows focusing on his exploits, knowing that the increased visibility will most definitely increase his business.  He loves his job but he also realizes that more shark exposure leads to bigger shark business.

And apparently an every increasing fascination by everyone involved.  I have posted pictures like these on Facebook that have gotten more likes than anything I’ve ever posted, by far.  I have new Facebook friends from acquaintances made on the trip and we are sharing our great images and stories with our respective circles of influence.  We have a whole new group of shark friends, which is fascinating.   We are marketing for Eli in emotional ways that a magazine never could.

Here’s how powerful focused marketing and building community can be:  I found myself standing in the office kitchen this week, mesmerized by some huge scary fish and the people trying to get ever closer to them.  Up to this point, I have had zero interest in Shark Week.  Now I’m DVRing it.

Could a tattoo be in my future?