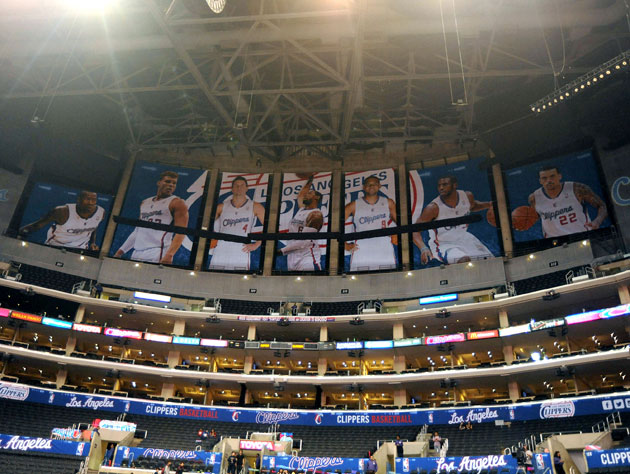 HB’s New Clippers Banners Cause a Stir in Los Angeles

HEILBrice has been the Clippers’ agency of record since they moved to Staples Center in 1999, and since then, we’ve become pretty major fans. And as fans, we were stoked on one of our major projects for the team to help them get ready for the season: creating seven larger-than-life Clippers banners to hang up in Staples Center during Clipper’s home games.

We approached the team a few seasons back to suggest putting up smaller Clippers banners all around the arena to make Staples feel like their house during home games, and the idea was a hit. Hanging the Clippers banners has now become part of the set-up routine for games right along with changing out the floor. When new head coach Doc Rivers arrived, he asked us to create something to cover the Lakers’ championship banners. That has created a lot of stir, with many Lakers’ fans decrying the move as disrespectful. But there’s no disrespect meant: the Lakers are obviously an extremely successful organization, and their accomplishments will always stand in the world of the NBA. But the Clippers should be free to create an environment that fosters a new Clippers culture during their home games—and we think the Clippers banners are a great step.

Plus, they look pretty awesome: the banners are 20 feet wide and 80 feet long and feature seven of the LAC’s best players. Coincidentally, the lights that the Lakers hung up to illuminate their championship banners do a wonderful job of lighting up Cp3, Blake Griffin, DeAndre Jordan, Jamal Crawford, J.J. Redick, Jared Dudley, and Matt Barnes. You can check out a shot of our banners in the new spot we’ve just finished producing below.