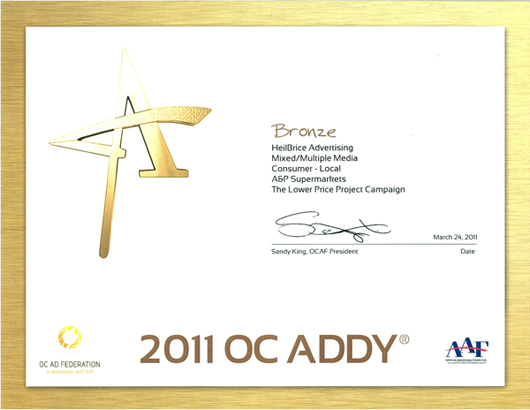 We are proud to announce that the Orange County Ad Federation recently awarded HEILBrice a Bronze Addy in the Mixed/Multiple Media category, for our A&P Lower Price Project campaign. It’s nice to receive awards – thank you, thank you. But the really interesting part of the effort is the story behind it; so here’s a little background. When we started work on the account, our research told us that many customers believed A&P’s prices were too high. To make matters worse, their previous price reduction programs had been short-lived. Customers had heard the “lower prices” claim before, only to watch prices rise again shortly after the so-called reduction. A&P’s credibility on pricing was in tatters. So as we sat down to craft a campaign that would win back customers for the brand, we had to not only communicate a lower price message, but we had to do it in a way that consumers would find believable – for a change.

There was one other small problem. Given that A&P was in the middle of a turnaround, they couldn’t simply slash prices throughout the store all at once. That would have resulted in a financial disaster. Price reductions would have to be executed in waves, over a period of months. This unique situation led to our idea for the title of the program– The Lower Price Project. The name accomplished two things: it stated that prices were being lowered and that the reductions would be accomplished over time.

Now we had to find a way to address the issue of rebuilding A&P’s credibility in the minds’ of consumers. Again, our research findings helped guide us toward a solution. The same report that pointed out the high price perception, also uncovered an insight into the psyche of A&P customers – they loved celebrities.
They envied the celebrity lifestyle, but more importantly – they trusted them.
To capitalize on this trust, we searched for a celebrity that could deliver the message of the Lower Price Project and we found Kelly Ripa. As a New Jersey native and co-host of the New York-produced “Live! with Regis & Kelly,” she seemed a natural.

Our intuition was correct. As the spokesperson in The Lower Price Project campaign, Kelly not only helped our advertising breakthrough the clutter of the media saturated New York market; but more importantly she helped bring credibility to the message. It also didn’t hurt that the eye-catching, graphics-driven commercials that we shot and edited in New York, really stood out from the typical supermarket spot. The results were pretty amazing too. Within weeks of the campaign launch, awareness of A&P’s new lower prices was on the rise, lapsed customers were returning to the store and sales were taking off. As I said at the top of this story, it’s nice to win awards; but the real satisfaction comes when you can see results proving the advertising really worked.