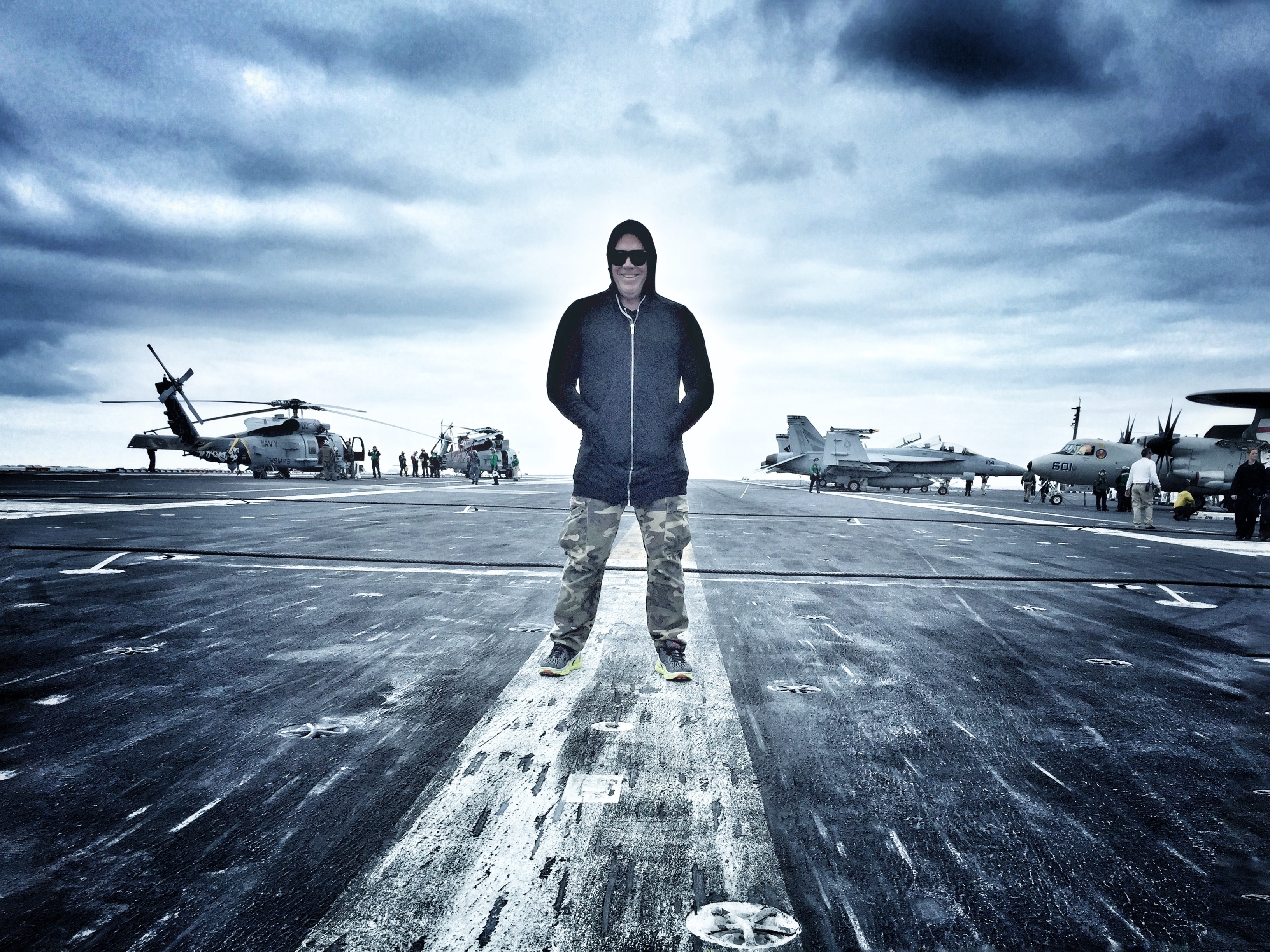 For Memorial Day: This is best experiential marketing you’ll ever see. Aboard the USS Carl Vinson

100 MILES WEST OF SAN DIEGO ABOARD THE USS CARL VINSON—

Here’s the marketing challenge.  You’re the US Navy.  You are a global force for good.

You can be anywhere in the world with a very large, scary presence in a matter of mere hours.

With an incredible fleet of 10 nuclear powered aircraft carriers—all of which roll with a veritable flotilla of support ships to surround, support and protect them—the US Navy is untouchable when it comes to sheer fighting power and diplomatic deterrence.  We hear a lot about drones these days and all our on-ground-wiz-bang technology.  And all that is also incredible.   But let’s talk sheer intimidation:  Any nation on earth is going to think twice when a single ship the size of a medium size shopping mall, with a 4.5 acre parking lot on top, full of enough deadly weaponry to shut just about anything down, comes rolling into town at 30 knots.  (30 knots is freaking FAST by the way.  Rumors say our Nimitz class carriers can go much faster, pretty much leaving any ship trying to keep up, sputtering in its gargantuan rooster tail.  -Go nuclear reactors!)

And yet, if you’re the average taxpayer, you really have no idea about the power, the scope, the majesty of what this force does.  You have no idea that there are over 5,000 people and 75 aircraft on each one of our carriers, and that the average age of the sailors who weald this awesome tip of the sword, is a fresh-faced 22.  They are a respectful, dedicated, driven group of men—and many more women than you would expect—working 12-18 hour days for months on end without a day off, so that you and I can spend our time contemplating important things—like what The Game Of Thrones episode last night meant.  We are absolutely free to do that and every other questionable choice we make because of the crew of USS Carl Vinson and her like.

So how does the Navy tell this incredible story?  Because people frankly, aren’t paying much attention.  And when the battle for funding goes down in Congress, the last the Navy wants to be is forgotten.

Well, there are really cool TV commercials— A Global Force For Good.

And that speaks to potential recruits.  But what about the rest of us?  The people who are not in the military, but can weigh in with opinions on whether or not all of this military might should be funded.

Smartly, I think, the Navy has something called the Distinguished Visitor program.  A good friend recently helped a handful of us sign up for a flight out to a real live aircraft carrier and observe, experience and learn in a real behind-the-scenes experience.  Besides being a once in a lifetime experience, it was also the first time I’ve been called “distinguished.”  I’m thinking of taking up smoking a pipe.

We flew out the Vinson on a recent Friday on a turbo prop C-2 Greyhound.  It’s called a COD–Carrier On-Board Delivery.  And boy, did it.  We sat facing backwards for the 45 minute flight out wearing helmets and two kinds of ear protection.  Strapped into seats with a five point harness, to keep us secured for what’s called an “arrested landing.”  That means literally going from 130 miles an hour to 0 in two seconds.  No real way to explain how that feels actually.

For the next 24 hours, we climbed all over the ship.  And there are a lot of stairs.  And they move quickly.  We met the Admiral who runs Strike Force One, which includes the Vinson and all the other ships that travel with her.  His last job was being the Navy’s liaison to the US Senate.  We sat in the war room, which has live video capabilities to all the other ships in the group as well as command in Washington—as well a Red Phone–which is NOT, I’m told a direct line to Dominos.  We also met sailors of all sorts, including a young 20-something female who gave us a detailed briefing on every kind of bomb carried on board.

We came to understand what all the different colored shirts on the flight deck and how they do their jobs.  We hung out with a bunch of pilots in their ready room.  These were F-18 fighter pilots, charged with bring home a $125mm fighter jet to land on the flight deck.  At night. While the whole thing is moving up and down with the swell of the ocean.  They looked like they were about 26 years old.

We got to eat with the crew and learn about their lives and the fact that they serve 14,000 meals every day on board.  (!)  That they have a full hospital and a dental office and a TV station and a newspaper.  Everything a small town would have.  I did not actually see this with my own eyes, but there is apparently a Starbucks.  That the enlisted sailors sleep three high in bunks and have a small locker for all their stuff while on board.

We heard about deployments, when the Vinson leaves home from San Diego and doesn’t come back for between 9-12 months—during which families wait it out.  About how in the last deployment they spent much of their time dropping bombs on ISIS targets in Syria.

The Carl Vinson was where Seal Team Six deployed from to take out the world’s most wanted terrorist four years ago.  It’s also where they brought his body back and eventually slid it into the ocean off of one of the 4 elevators used to bring aircraft up from below deck.  That happened.  And since it wasn’t even a topic of conversation that anyone from the public affairs staff  brought up, it’s easy to imagine that so many other things happened there too.

What did I learn?  Two big things primarily:  First, that we have an incredible military that can intervene anywhere—and that half of what carriers do is humanitarian aid (Haiti earthquake, Indonesian Tsunami).

But most importantly that the people running this show are men and women of purpose.  They are there because they believe deeply in what they are doing—and they work their butts off for almost no money to prove it.  They are bright and they do complex jobs with vigor and respect.  Interestingly, the vast majority of enlistees are there because a close family member was also in the military.  It is a culture of service that we should try and figure out how to grow.

So if you can, try and hire a veteran.  We talked to a Master Chief on the Vinson, in charge of the 3500 enlisted men on board, with 200 direct reports and career experience in electronics.  And he is getting ready to retire.  Talk about leadership skills.  Someone needs to hire him immediately!

The military has not been top of mind for quite awhile.  It is again now.  I think that is really the whole point of the Distinguished Visitor program.  To turn people like me into brand advocates who are proud to spread the story.  I really do wish you could have gone too.  That’s why I’m urging you to take a second to consider the strength that keeps us free, the men and when who get it done 242/7 all over the globe… and the super cool video of jets taking off and landing that I shot with my iPhone.

Memorial Day is to remember those who have given the ultimate sacrifice.  But I saw those who continue to serve and sacrifice today also deserve our love and prayers.

Thank a soldier for their service today.