HEILBrice
Ideas That Build Business
Thomas J. Lipton – the Man and the Brand 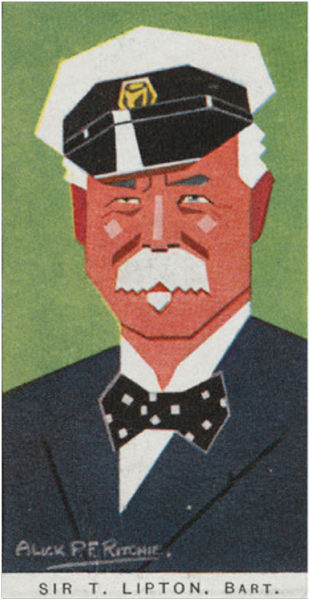 If you’re a tea drinker, you probably associate the name “Lipton’s” with boxes of inexpensive tea bags and the slogan, “The Brisk Tea”.  But a hundred years ago, the name “Lipton’s” stood for a lot more.  “Lipton’s” was the biggest chain of grocery stores in the world.  And it’s founder, Thomas J. Lipton, was reportedly the best-known and most admired man on the planet.  He was in many ways the first true “brand.”

In his fascinating book,  “A Full Cup,” Michael D’Antonio, has delivered a riveting account of the life and triumphs of this retail giant.  Born in Scotland in 1848, Lipton began life in abject poverty.  His Irish immigrant parents operated a tiny store in the slums of Glasgow.  Selling a few staples like eggs and bread, they were barely able to eke out a living.

While his father was happy to simply survive, no small feat in those days, young Thomas sets his sights much higher.  The family store became the launching pad for his dreams.  Despite little formal education, he took over the shop and began to expand the inventory. Quickly grasping the concept of bulk buying, he would arrive at the city docks on the River Clyde before dawn.  There he’d buy up the cheapest products he could find as they came off the ships – sides of bacon, rolls of cloth, bags of flour. He didn’t really care what he bought so long as the price was low.  Displayed beautifully on tables outside the store (something no one else was doing), the products were snapped up by poor Glasweigans eager for a bargain.

The store became wildly successful, in large part because Thomas was a gifted promoter as well as a shrewd merchant.  He dreamed up stunts like having elephants (a rare sight in Glasgow) parade through the city carrying signs with the name “Lipton’s.”  He once bought a 4,000- pound wheel of cheese, put the Lipton’s name on it and transported it in the back of a horse cart to his store.  There he personally cut hunks of cheese from the wheel and sold them on the spot.  All of these stunts were well covered by the newspapers and drew even more customers to Lipton’s.

Always ambitious, Lipton plowed his profits into opening additional stores in Glasgow and soon branched out to other cities in Scotland and England.  Sticking to his formula of low prices, elegant displays and headline grabbing promotions, he built Lipton’s into the biggest chain of grocery stores in Britain.  By the time he was 40 years old, Thomas J. Lipton was fabulously wealthy.  He could of stopped there and just enjoyed life.  But he was driven to do more.  He used his wealth to support charities, an unheard thing for the rich of those days.  And he treated his employees like family.  He paid them generously and helped educate their children.   A shameless publicity hound, Lipton wasn’t shy about getting the word out about his largess.   The public loved him for it.

Amazingly, decades before television and a century before the internet, one man was able to build a huge business and a worldwide brand through sheer hard work, daring, imagination, empathy and a flair for the unexpected.  All good lessons for us as marketers today.